The school was built on to the Primitive Methodist chapel, in 1842 at a cost of £400. The first headmaster was Mr Tuck and by 1845 there were 45 pupils. The financing of the school proved a strain for the Methodists and in 1858 they were glad to accept an offer from the British and Foreign Society to take over the school and run it on non-conformist principles. From 1858 the school became known as the British School. In 1867 the schoolroom behind the master’s house was pulled down and a larger one built. More land was also bought to extend the playground and to build a separate infants’ school. Another classroom was added a little later. 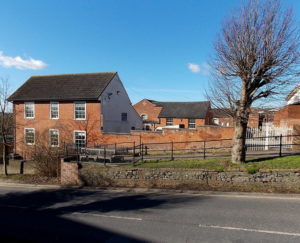 From 1873 to 1910 the school benefited from a long serving headmaster, James Smith. Another classroom and a cloakroom were added in 1891 and more improvements were carried out in 1897. In 1902 it was reported that the children were ‘being taught with care and intelligence’. There were 170 mixed pupils and 99 infants in 1903. In 1904 Wiltshire County Council took over the school as the local education authority and from then onwards it became known as the County School. Over the next few decades the school grew greatly in numbers of pupils on the roll.

The buildings in the early 1950s were largely unchanged from how they were in 1900. In 1955 there were 270 pupils aged between 5 and 15 years. This situation was slightly relieved in 1958 when those over 11 years were transferred to the new Modern School and the school became a junior and infants’ school.

Noremarsh School opened in 1968 and children aged over 7 years moved there while the infants remained in their school on the old site. The infants’ school has been considerably improved since then but has remained on the original site.